Walking through the heart of Albuquerque’s Nob Hill can be a dispiriting exercise, passing, as you will, the emptied-out storefronts of ventures felled by the one-two punch of the Albuquerque Rapid Transit project and pandemic restrictions, not to mention the challenges faced by small businesses in the best of times.

That Italian ice cream place is gone, as are the Asian restaurant and a couple of other food places. The gallery that used to be here – the one with the quirky lowbrow art – has moved to Algodones. Bummer.

But then, just up ahead, fluttering in a light autumn breeze like a gaudy beacon of defiance is the rack of Hawaiian shirts Steve Schroeder displays in front of his Nob Hill Music store. For $10, you can buy a piece of Paradise or a ticket to Margaritaville. 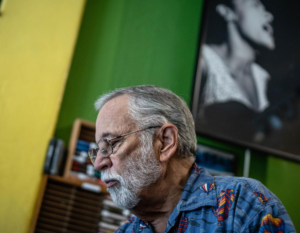 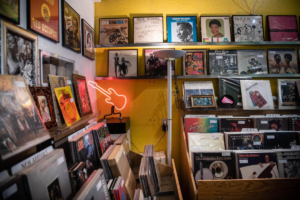 Steve’s experience includes hosting bands as a concert producer in the 1970’s;

Steve drove members of the Allman Brothers Band around Albuquerque in his 1967 GTO, four-speed, red with vinyl black top.

ABQ Journal: “There were three of them in the back seat and Gregg Allman in the front, passenger seat,” Schroeder said. “They all wanted to buy the car.” 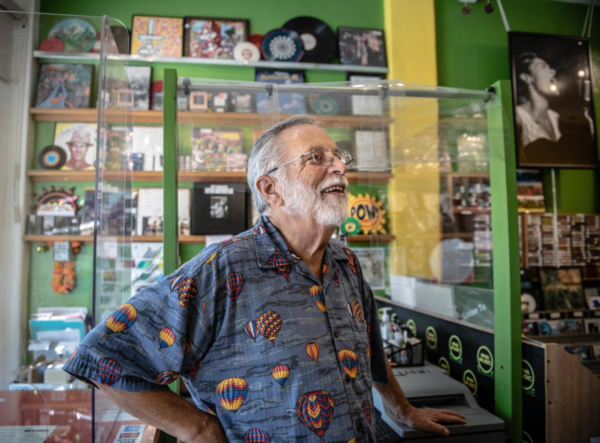 And if the shirts are out there, the store – boasting a treasure trove of vintage vinyl records, CDs, cassette tapes, framed album covers, record-label coasters and related items – is open.

“This is an essential business,” Schroeder said. “Vaccines take care of the body, but music takes care of the soul.”

It does seem extraordinary that in a time when most people digitally download music onto smartphones, computers and MP3 players, when turntables are more rare than phone books, cassette tape machines are an endangered species and car manufacturers no longer install CD players in vehicles, that a store selling records, tapes and CDs can survive the train wreck of today’s economy. How’s that happen?

No doubt some, if not most, of those people, are vinyl junkies with a vested interest in keeping their supplier up and going.

Schroeder, 75, had been working at the late Albuquerque record store Natural Sound for 24 years when he recognized a renewed desire for vinyl recordings, which had been supplanted years earlier by cassette tapes and CDs.

That prompted him to open Nob Hill Music 12 years ago at 3419 Central NE, where it is still located. The store started out selling only vinyl, about 1,500 recordings culled from Schroeder’s own collection. The used CDs and tapes came later.

Today, 60% of the store’s music stock and 95% of Schroeder’s extensive personal music collection is vinyl.

“The sound is warmer,” Schroeder said of vinyl. “Vinyl records can have brochures or booklets, inserts, picture sleeves, posters, different shapes and colors that add to the knowledge about artists and their music. Plus, playing and having records is more engaging, requires vintage equipment that is really cool and records are quite collectible.”It’s not just people in Schroeder’s age bracket who are hunting down music from decades past.

Schroeder sold only vinyl records when he opened Nob Hill Music 12 years ago. He later added CDs and cassette tapes to his stock. “CD sales are picking up because now people can’t find them many other places,” he said. (Roberto E. Rosales/Albuquerque Journal)

He said a young man came into the store recently and bought a two-CD set of music by Peggy Lee, the sultry voiced jazz and popular music singer who made her first recording in the early 1940s. And there was the 16-year-old girl who stopped in and picked up a vinyl record by Fabian, the teen idol singer whose career started in the late ’50s

“The internet gives you the ability to see and find things you never knew before,” he said. “Younger folks are exploring. And I keep hearing that buyers like older music because it is much better than the new stuff that’s available.”

Schroeder grew up in Santa Fe watching Dick Clark’s “American Bandstand” dance show on TV. His own taste in music is an evolving thing. Early on, he was a fan of soul singers such as Stevie Wonder, the Supremes and the Four Tops, but most of his personal record collection is rock music, and, if prodded, he’ll point out the Beach Boys and the Beatles as favorites in that genre. These days, his taste runs to jazz.

Schroeder comes by his love for things old and hard to find honestly. His family settled in Santa Fe because his father, Albert H. Schroeder, was a Southwest Indian archaeologist employed by the National Park Service.

His mother, Ella, did estate sales for banks, insurance companies and individuals.

“She got me a lot of records at thrift stores,” Schroeder said of his mother. “She taught me all the tricks of the trade. She’d find Hawaiian shirts, too. I started wearing them, and people would say, ‘Where’d you get that?’ I heard demand.” That led to the rack of shirts outside the store.

“I used to sell them only during (Nob Hill) Summerfest,” Schroeder said. “Now, I sell them from April Fools’ to Halloween.”

After graduating from Santa Fe High in 1964, Schroeder enrolled at the University of New Mexico but soon left to join the Navy.

“I started collecting records in the Navy, about 1967,” he said. “That’s the first time I had a job and was making money. I was into surf music then.”

After the Navy, Schroeder returned to UNM. He earned an undergraduate degree in business in 1974 and a master’s in public administration in 1979. But his most valuable education at the university may have been experiences he gained outside the classroom.

“I helped my friend get elected student body president at UNM, and he made me chairman of the popular entertainment committee,” Schroeder said. “He knew I collected music and knew artists.”

In the early ’70s, Schroeder started booking musicians into the UNM football stadium, the Pit and Popejoy Hall.

“The first show at the football field featured Steve Miller, Boz Scaggs, Marshall Tucker, Lynyrd Skynyrd and the James Cotton Blues Band,” Schroeder said. “Following that was the Rolling Stones and Stevie Wonder at the Pit.”

He drove members of the Allman Brothers Band around Albuquerque in his 1967 GTO, four-speed, red with vinyl black top.

“There were three of them in the back seat and Gregg Allman in the front, passenger seat,” Schroeder said. “They all wanted to buy the car.”

Despite the economic challenges of the past few years, Nob Hill Music’s Schroeder is just happy to be open for business. “I have become appreciative of everything in my life,” he said. Hay fever is the only thing I can complain about.” (Roberto E. Rosales/Albuquerque Journal)

Because he had successfully managed his pal’s campaign for student body president, people started calling him for help on other races for elected office. That spun into a political consulting gig he did for a lot of years.

“I have 200 campaigns under my belt, from student council president to Bill Richardson and Jeff Bingaman,” Schroeder said. “I worked on the campaigns of the first openly gay person elected in New Mexico and the first Hispanic woman elected to the (New Mexico) Supreme Court.”

Schroeder, a man of opinions and principles, might have made a run for public office himself, but he said his wife, Sherry Rice, a drummer with Swing Shift, a dance and big band music group, won’t let him.

His experience in politics, however, stood him in good stead when he decided to take on the 2016-17 ART project, which put in a rapid-bus lane from Unser, along Central, through Nob Hill to Tramway

“I walked the ART route, Louisiana to Coors, 11 miles, both sides of the street,” Schroeder said. “It took me weeks. I, as well as others, got all these signatures, many thousands, from businesses and individuals who were against ART. Fighting ART was not a choice, but a responsibility. It seemed like a waste of money without any obvious benefit.”

Schroeder went as far as filing a recall petition against District 6 City Councilor Pat Davis because he felt Davis was ignoring his constituents’ concerns about ART. He withdrew the petition once it became apparent the project was a done deal.

Schroeder said ART hurt his business and killed many others.

“People didn’t come down here because of the construction,” he said. “I started keeping a list of places that went out of business along the ART route. I stopped counting at 63.”

His store was closed from March 20 to Sept. 3, 2020, due to the pandemic. When he reopened, he rolled back his days of operation from six to four. Now he is open from noon to 6 p.m. Thursdays through Sundays.

The pandemic shutdown was a brutal blow, but he is not bitter about it.

“The governor was being responsible,” he said. “She was taking (the pandemic) seriously, and so do I.”

A sign on Nob Hill Music’s front door says “No Mask, No Brains, No Entry.”

“I was sorry to lose the business, but I’m glad to still be in business,” Schroeder said. It’s even possible that months of self-isolation might yield some positive results for the store.

“After being home for a year listening to the same music, you need different stuff,” Schroeder said.

“But no eight-track tapes,” Schroeder said. “Eight-tracks are dead.” 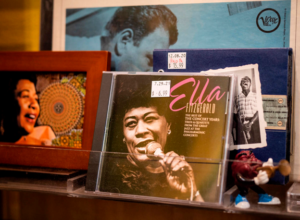 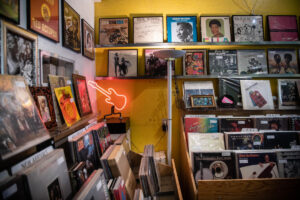